Since their appearance around the 1900s, roughly at the same time as cinema, comic books have been one of the most widespread forms of folk art. In francophone countries, they are called bandes dessinées (“drawn strips”), or “BD,” in the short form. Indeed, throughout the 20th century, European comics developed their own styles, distinct from their Japanese or North American counterparts. Comics flourished particularly in Belgium and France (and to a lesser extent in Italy, Spain, Germany, and the Netherlands).
Hence, classical francophone comics came to be referred to as franco-belge (Franco-Belgian), to highlight their specificities. Since then, especially from the 1970s onwards, francophone comics have evolved into a much more diverse variety of styles, themes, and sub-genres. Also, eventually achieving more recognition as an art form, they are now often called le neuvième art (“The Ninth Art”).

Hong Kong also has its own classical comic books, such as Old Master Q by Wong Chak or Oriental Heroes by Tony Wong. They became very popular starting from the 1960s onwards. In later decades, Hong Kong independent comics flourished, yet perhaps still overshadowed locally by Japanese manga. But they have undoubtedly achieved international recognition.

by Louis Forton: one of the very early French comics.

Old Master Q by Wong Chak: one of the most popular Hong Kong comics

In France, a major comic book festival takes place every year in the southwestern city of Angoulême. First organized in 1974, it became one of the most important international venues for comics at large.

Some of them had already had the opportunity to be translated by French publishers: Li Chi Tak, Lai Tat Tat Wing, Yeung Hok Tak (Qu’elle était bleue ma vallée, 2006), Ahko, or Chi Hoi. In 2013, for the 40th edition of the festival, artists Siu Hak and Little Thunder (author of Kylooe, also translated into French), were invited, and took part in a “drawing-concert.” And in 2016, for the first time, an entire exhibition was dedicated to a Hong Kong comic book artist: “Li Chi Tak : un sorcier à Hong Kong” (Li Chi Tak: A Wizard in Hong Kong). The same year, Li, now considered a “godfather” of Hong Kong independent comics, published The Beast, with a scenario written by Belgian writer Jean Dufaux.

Hong Kong has had a special venue dedicated to the conservation, exhibition of, and international exchanges related to comics: Comix Home Base, opened in 2013, under the supervision of Hong Kong Arts Centre (HKAC), which is very active in promoting local talents. Indeed, collaboration with HKAC led to the organization of further events including French and Hong Kong comic book artists. In 2019, a Hong Kong comics touring exhibition called OUAT (Once Upon A Time), was launched, as well as residencies of Hong Kong artists in Angoulême. In the frame of OUAT, French artists and publishers were invited to Hong Kong, in return. Activities were also held at Hong Kong’s Alliance Française involving French artists Claire Malary and Stéphane Levallois. Stéphane Beaujean, artistic director of Angoulême festival, also held a conference on the economics of comics as a publishing sector in France and abroad, attended by many AF students.

In January 2019, during the 46th festival of Angoulême, French Minister of culture Franck Riester announced that 2020 would be the “Year of comics” in France, through the BD 2020 set of events. And in early 2020, HKAC launched FEVER, the successor event of OUAT, with artists Lau Kwong-shing, Li Chi Tak, and Yanai being invited to Angoulême, while being exhibited at Hong Kong Arts Centre. All three are publishing a book in French: Moon of the moon, by Li Chi Tak, in collaboration with Le Louvre Museum in Paris, Frankenstein Family by Yanai, and Fantaisie Ordinaire (Ordinary Day) by Lau Kwong-shing. 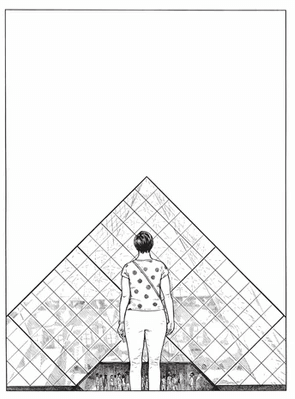 Please reserve your place at the following website. Enrolment is on a first-come-first-served basis.
https://hkac.org.hk/calendar_detail/?u=aC73bELI9NQ