Have your level of French recognised FOR LIFE!


Get your level recognized by international standards at Alliance Française de Hong Kong, the only Official center of French Exams and Diplomas in the city.

The DELF and the DALF have been organized at Alliance Française de Hong Kong since the early 90s.
It is a widely recognized diploma based on the levels of the Common European Framework for Languages (CEFR).

More than 500,000 people pass the DELF exam every year. Every DELF has the same value and is valid for life!

Here is the display of DELF & DALF Diplomas' structure following its versions: 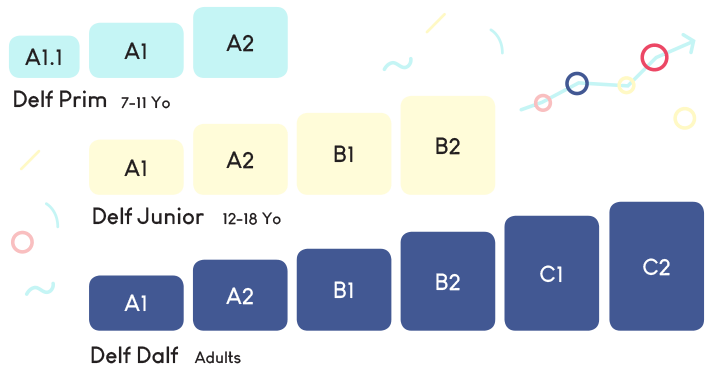 
DELF certification are internationally recognised and may qualify for credits under various educative systems in the world, like in Canada, in BC. See for example the British Columbia Ministry of Education External Credentials Program (type keyword: Delf). This means that passing the DELF grants you or your children extra chances for entering the best Universities in a series of countries.

If you are thinking about studying and living abroad in Québec, you can now reimburse your course at Alliance Francaise Hong Kong if you fulfill the requirement of Ministère de l'Immigration, de la Francisation et de l’Intégration du Québec. Check their website to see how to obtain a reimbursement.

7-12 years old
An exam intended for Primary School students who are beginners in French as a Foreign Language.

12-17 years old
The DELF Junior is a certification for Secondary School students.

Adults - Levels A and B
A French language qualification recognised all over the world to attest to a level of competency.

Adults - Levels C
The most advanced diplomas in French as a foreign language, granting access to Universities.

It is a French language competency evaluation test. It provides a snapshot analysis of the candidate’s level of proficiency.

TCF is some sort of linguistic photography of their level in French at the time the test is taken.
The Certificate of Achievement is valid for 2 years. It does not require specific study.

DELF helped my kid to enter an immersion high school in Burnaby, BC, Canada with the credits obtained in equivalence.

TCF is a quick and efficient way to assess your language proficiency. I had to pass it to prove my French level for a new job in a French company.