Discover a famous French filmmaker through a selection of her best movies!

We are excited to invite you on an artistic journey through French cinema, with a special spotlight on Agnès Varda.
Le French May Cinema Programme, entitled “Tribute to Agnès Varda” pays tribute to one of the masters of French cinema, acknowledged with an honorary Oscar in 2017 for her whole career; she is the first French woman ever to receive this award from the Academy of Motion Picture Arts and Sciences. 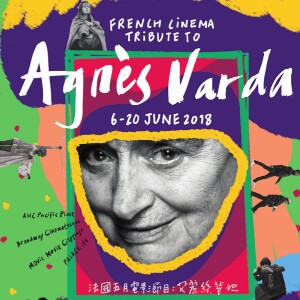 
“Tribute to Agnès Varda” will present a selection of 12 major films of Agnès Varda. The programme is completed with 4 films chosen for families and for your delight. “Tribute to Agnès Varda” is an ode to one of the major directors of the Nouvelle Vague, her art and freedom out and in the movement. Ms Varda’s works are also marked by the seal of social involvement and of her life-long companion Jacques Demy.
We have this special chance given during the festival to see, see again or just even discover her extraordinary world.

Cleo from 5 to 7 by Agnès Varda

One Sings, The Other Doesn't by Agnès Varda

One Hundred and One Nights by Agnès Varda

The Gleaners and I by Agnès Varda

The Beaches of Agnès by Agnès Varda

The Quest of Alain Ducasse by Gilles de Maistre

Belle and Sebastian, Friends for Life by Clovis Cornillac

Return of the Hero by Laurent Tirard