A film noir and a Franco-Chinese intrigue, dealing with crime and electro music.

First feature film of director Frédéric Farrucci, « La Nuit venue » is inspiring not only for its story, but also for its cruelly realistic description of certain underprivileged areas of Paris, where human exploitation - by other humans or by the obsession of profit-making in the neoliberal rationality - has caused a great deal of suffering to tens of thousands of less fortunated people. The fim has brought to the large screen the lives of the Chinatown communities and Chinese immigrants in Paris, which until now had been rarely featured in French cinema. It is a crime movie filled with social and political critiques, told with a humanistic voice. 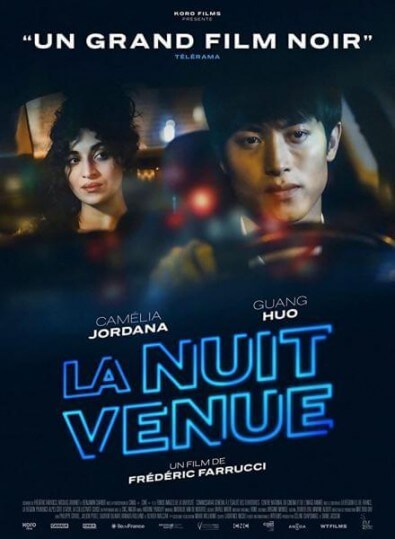 Paris, 2018. Jin, a young undocumented immigrant, drives an illegal taxi (VTC) every night on behalf of the Chinese Triads. His trips are punctuated by sophisticated electro, a relic of his past as a DJ in Beijing. One night, Noémie, a stripper and a bewitching call girl, boards his car. Intrigued by Jin's silence and aura, and carried away by his music, she decides to make him her private chauffeur. As they travel in night-time Paris, a love story develops - a doomed love which pushes Jin to break the rules of the criminal underworld...

French for "dark film", film noir is a loosely defined genre. It can be arguably said to have originated in Hollywood; the 40s and 50s being the Golden Age of American film noir. The movies are usually crime dramas. Before the term film noir was coined, they had been labelled simply as melodramas.

Film noir connotes specific visual and thematic styles and an aura of cynicism. Some notable characteristics include a stark high-contrast lighting (with shadowy images and a dark atmosphere), a noir hero (alienated, morally ambiguous and often with a fatalistic world-view) and a femme fatale (victims of society or of personal relationship but capable of manipulating their male counterpart into pursing a doomed path).

Yet the genre has evolved throughout the years, and these conventions are no longer fixed boundaries and rules. The neo-noir films are continuously adding new elements and refreshing the genre.