This month our librarians, Irwin and Hugo, present us with a few of their own picks from AF’s médiathèque titles: an autobiographical comic, a documentary film, a sci-fi novel and one for our young readers.


In the 1990s, the “new wave” of French comic books came into fashion and favored the genre of autobiography. Hence, it is not surprising that the early 2000s saw the rise of the first online comic-blogs . To name but a few, blogs by Cha, Laurel, Frantico, or Pénélope Jolicoeur (Pénélope Bagieu) quickly caught the public’s attention. Boulet is one of the most famous of these artists, and one whose blog, started in 2004, is still active today. This book encompasses the first two years of Boulet’s blog. Through a variety of graphic styles and narration techniques, readers will dive with delight into the micro-events of an artist’s everyday life. Including never-ending struggles with deadlines, accounts of the author’s weirdest dreams, a trip to South Korea and desperate attempts to bring a computer back to life… among other self-deprecating adventures!


With the many cities locked down currently, films are for us, especially the cinephiles, coals for winter nights. Almodóvar now writes in an online dairy about films he watched during these times and the influences they had on him through his career. Tarantino shares his knowledge in detailed reviews of some lesser-known works, with one of his pieces centered on Hong Kong martial arts genre. This documentary may well be the equivalent for French cinema: renowned director Tavernier reflects on the many French films and filmmakers that have made their mark on cinema history as well as on his personal growth into a successful creator. More than a documentary, it’s a memoir, a homage, full of affection.


An international team of scientists receives a mysterious signal from deep underneath the ice of the South Pole. There, they discover a woman and a man, asleep in a strange shelter. The two beings turn out to be the only survivors of a flourishing, very advanced human civilization that abruptly disappeared 900 000 years ago... This sci-fi novel by René Barjavel originated from a script written for a film that never went beyond the stage of pre-production. Published in 1968, it bears the mark of the Cold War and the fear of humanity’s disappearance through nuclear apocalypse, as well as the Paris May events. A masterpiece of imagination and a timeless love(s) story. 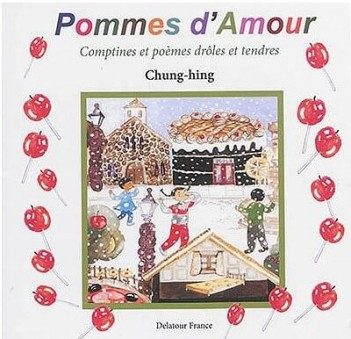 As its subtitle suggests, it is a collection of funny and tender nursery rhymes and poems. Although the primary public of the book is youngsters, a grown-up will equally find immense pleasure in reading it. These rhymes and poems merge imagery, musicality with the author’s appreciation of life and nature. What we mean by imagery here does not only refer to the imagery evoked by the lyricism, but also to the illustrations because Ching-hing is also a painter. She writes and paints. And she paints with such personal style as she does with her writing. What may also be particularly of interest to our public is that she grew up in Hong Kong before settling in France in the 70s; the experience explains the traditional Chinese elements in her works, which further demonstrate her originality and sensitivity.

Jean-Sébastien Attié wrote:
Official
4 May '20 4:36am
The Voyage à travers le cinéma by Tavernier is a wonderful documentary by a cinema lover and great cinematographer.

A must watch if you are passionate about cinema.
Reply