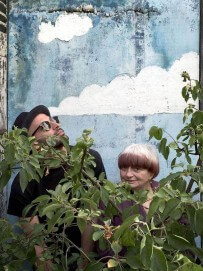 Agnès Varda and JR have things in common: a passion for and the exploration of images in general, and more precisely, for places and for ways of showing, sharing, and exhibiting them.
Agnès chose cinema.
JR chose to create open air photography galleries.
When Agnès and JR met in 2015, they immediately wanted to work together, to shoot a film in France, far from cities, during a trip in JR's photographic (and magical) truck. Through chance encounters and prepared projects, they reached out to others, listening to them, photographing them, and sometimes putting them on posters.
This film also tells the story of Agnès and JR's friendship, which grew stronger throughout the film shoot, between surprises and teasing, and while laughing about their differences.